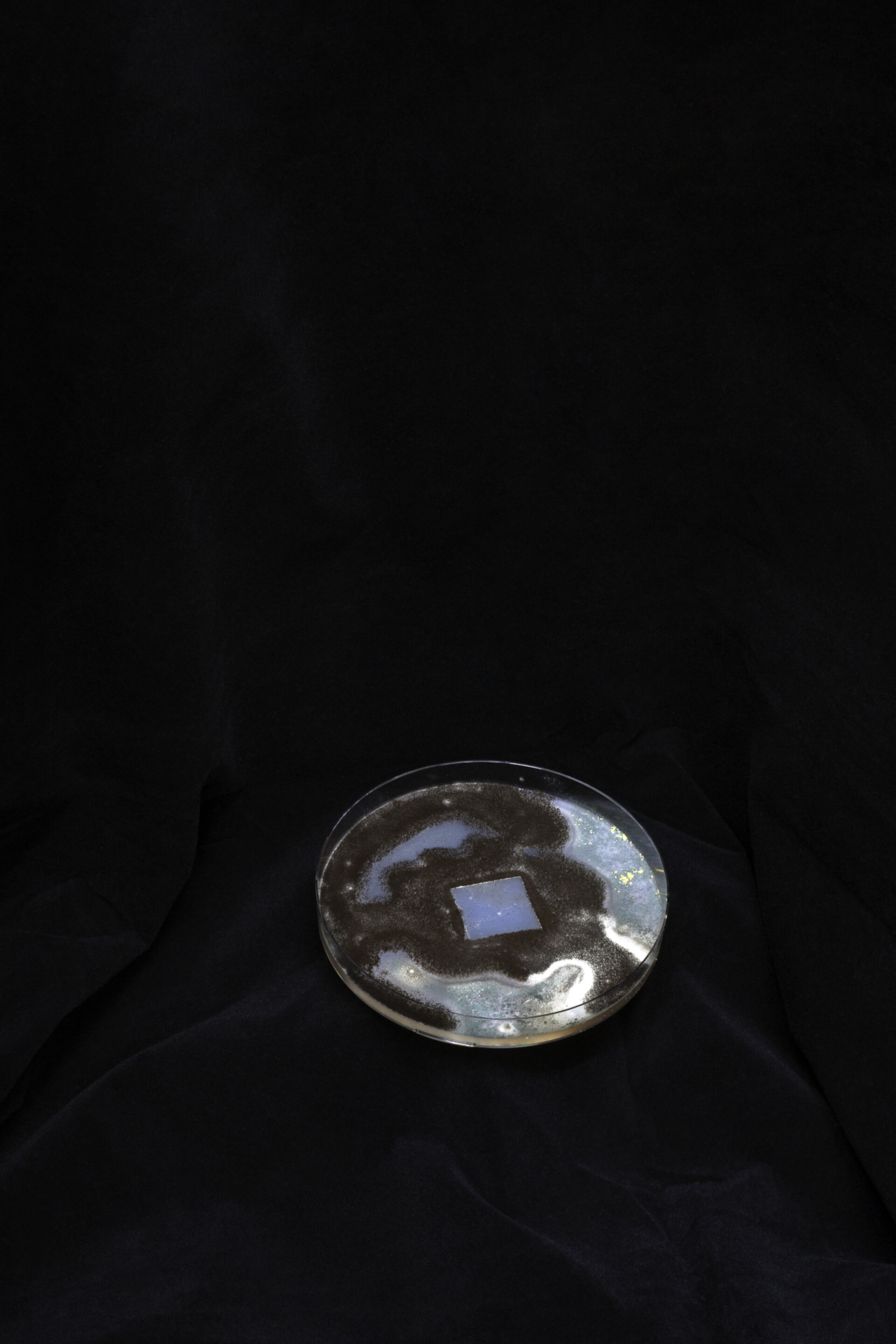 The exhibition on show is the fruit of observations, and subsequent visualizations, of the matter that is left behind in the former death camps of the Holocaust. This matter includes the biosphere surrounding these locations as well as the man-made structures built in these dehumanizing spaces. The research I conducted stand as a means of revealing the “afterlife” of certain processes taking place in natural settings that are suffused with the misery of human suffering. As the title of the work, I adopted the name of the fungus Alternaria Alternata, known to be among the most expansive of all organisms, which I encountered during my „microbiological peregrinations.”

The work of Anna Zagrodzka demonstrates the artist’s transdisciplinary competences, connecting the humanities and natural sciences. They allow Zagrodzka  to depict the world under a microscope, on the micro scale, thus on a level that in classical representations is rendered imperceptible. Her competences also enable a shift in perspective that transcends anthropocentrism while evoking an idea inspired by Bruno Latour, namely: it is not only the bacteria, fungi and lichens which the artist photographs that affect people but also the reverse is true – people affect microorganisms and flora. It is the encounter between the two that leads to a fundamental transformation of both life forms.

Anna Zagrodzka graduated from the Technical University of Lodz (Faculty of Biotechnology and Nutrition Science) and has an honour degree in Photography at Cinematography Faculty at the Film School in Lodz (2015). Her research focus on the relationship between art and science. Photographer in the architectural and artistic team at the project “Amplifying Nature” at the 16th International Biennale of Architecture – La Biennale Di Venezia (Polish Pavilion, 2018). Participated in the Sputnik Photos mentoring program (2016/2017). Laureate of Show Off during the Photography Month in Cracow (2015). She has participated in photography’s exhibitions in Warsaw (Archeology of Photography Foundation, 2017), Lodz (Fotofestiwal 2018, Wschodnia Gallery, 2017; Blask Brzask, 2017), Cracow, Wroclaw (TIFF Festival, 2015), Berlin and Bratislava (OFF_Festival, 2016). Zagrodzka has authored the following publications: “Subjective photography in Polish art 1956 – 1969” (Labirynt Gallery, Lublin 2016); “The rhythm of cool reason” in: „NOT.FOT. Władysław Hasior’s photographic notebook „(Tatra Museum, Zakopane 2017).

ACCOPANYING EVENT AS PART OF WGW:

"Around the Alternaria alternata exhibition" A conversation between Anna Zagrodzka and Professor Ewa Domańska.

The Microbiology of Presence: On Anna Zagrodzka’s art

Anna Zagrodzka’s photographs offer intriguing insights into the spaces and microworlds of Nazi camps as she combines humanities-inspired interest in the questions of institutionalized violence, dehumanization, trauma, witnessing and commemorating victims with research that has typically been the focus of specialists in conservation, in particular work in the field of microbiology. Conservators’ expert reports define the types of material degradation that is occurring and they identify bacterial cultures, fungi and mushrooms in order to establish the most effective methods of counteracting these “enemies of memory” that seek to efface evidence of the crimes committed at the sites. Oskar Hansen’s Droga (The Road) had a similar impact. The artist initially planned to spread chemicals over the Birkenau site in order to make the land barren, so that it would become a kind of ground zero. This would have meant killing nature, plant life, small mammals and insects in order to preserve the post-Holocaust space. Thus the extermination of people would in turn have led to the intentional and planned extermination of non-human subjects, with biocide and ecocide being used to tackle genocide. Zagrodzka’s photographs serve to document not only such practices but also the destructive nature of non-human actors engaged in the struggle for survival, dominance and space. Her images show the aggressive prevalence of life, confirming that the revitalization of a site of human death proceeds regardless, even if the inhabitation of evidence by bacteria and fungi is unplanned (and often unwanted) by humans. The artist’s depictions show that the microbiology of presence that reigns in this space demands being perceived within the framework of what Achille Mbembe has called “the universal right to breathe”.

II. The environmental microbiology of sites of mass murder

From a biological perspective, it is difficult to describe post-camp spaces as “spaces of death”. Laboratory studies of elements of buildings, artefacts, water and soil demonstrate the inexorable rapacity of life there. In Zagrodzka’s work, though, there are no traces of the Romantic images of friendly yet threatening nature perceived according to the aesthetic categories of beauty and sublime. The environmental microbiology of sites of mass murder describes various lifeforms inhabiting such spaces, together with their traits, qualities and modes of being. Her photographs depicting elements of the camp landscape offer a chronicle of events and the deterioration that results from bacteria, fungi and lichen inhabiting various objects (buildings, fences as well as vegetation). Biodegradation and the corrosion caused by biological factors transforms the structure of materials, causing damage and discoloration, and ultimately leads to decomposition and ruins. However, this is not the reading that the artist intends for her pictures. The colorizing filters Zagrodzka applies to her images recall the discolorations, shadows, stains and smudges caused by the activities of bacteria and fungi; they make us aware that we are witnesses to events that form part of a trophic chain. Fungi, which include the Alternaria alternata in the title of Zagrodzka’s work, are heterotrophic. They acquire sustenance by inhabiting various surfaces and causing the enzymatic decomposition of the substances encountered. Anthropocentric literature describes Alternaria alternata primarily in the context of their ability to produce toxins that threaten humans by causing allergies and illnesses. This is something that the texts accompanying the photographs remind us of. The images of trees do show, however, that Alternaria alternata also threaten plant life. They are classified as a “parasite of weakness” that attacks old and weakened trees. They are also a type of fungus that inhabits wounds on trees (including pines) and can blueing. Zagrodzka’s project documents this phenomenon by applying infrared filters to reveal to realities of plant life that would otherwise remain invisible to the human eye.

As Lynn Margulis states, “All life has chemical memory that cannot be dated by direct measurement”. It thus remembers the distant past. Following Margulis’ theory of symbiogenesis, it could be argued that Anna Zagrodzka’s photographic depictions of bacteria, fungi and their habitats cause us to recall something beyond the trauma of the mass murders committed at death camps. They not only refer to plants and objects, but go even further back: to the common origin and heritage of the prehistoric symbiosis that is the primary metabolism. Seen in the context of biohumanities, processes connected to carbon chemistry and the environmental microbiology emerge as something that is as important to understanding the life of the world/plant as historical processes. Anna Zagrodzka’s project documents the transformation of material that also interacts with the organisms colonizing it, demonstrating their mutual resilience and adaptability as these lifeforms mutate as they encounter difficult conditions. The images provoke the question: what do these living colonies of microorganisms tell us about the current realities of sites of mass murder? Can these bacteria and fungi be used to preserve these spaces and if so, how? It is possible to instead investigate the ability to cultivate microorganisms that help to preserve objects, rather than continue to focus on microbiological biodeterioration? Zagrodzka’s project thus inspires a critical rethinking of the idea of “microbiological purity”, which leads to the annihilation of lifeforms that humans consider destructive, impure, unwanted and/or hostile. Alternaria alternata are an important element of the microbiological version of the visual history that began with our common ancestors – bacteria. Seen in this context, Zagrodzka’s images lead us to consider the universal right to oxygen. And because they themselves constitute a habitat for various lifeforms they become an element of co-evolution and point to what we have experienced and what still awaits us.